Habitat For Humanity homeowners and a big group of their supporters gathered 4:30 p.m. July 17 to scoop up a golden shovelful of dirt and officially commemorate the groundbreaking of the EcoVillage project in River Falls.

The plan, according to Habitat staff and project volunteers, includes building 18 houses, varying in size among two-, three-, and four-bedroom homes in a mix of twin- and single-family-detached homes. The construction plan also calls for the completion of eight more homes in 2013 and four more in 2014.

EcoVillage’s sustainable features make it unprecedented; organizers expect the project to achieve certification in green building and for its homes to achieve nearly net-zero energy usage.

Some of the project’s Earth-friendly features include or will include super-insulated buildings; window placement to maximize solar gain; large solar photovoltaic and solar hot-water arrays on each home’s roof, as well as a “solar farm” of ground-mounted panels on site; rain barrels and cisterns to harvest and store rainwater from roofs; and shared community gardens plus “edible landscapes.”

So how does someone qualify for a Habitat home? SCVHFH Director Jim Farr says the organization works hard to dispel the myth that Habitat homes are a giveaway; they provide a “hand up not a handout.”

Habitat homes meet the affordability needs of households making 25 to 60 percent of the median income of an area; in SCVHFH’s case, the area is St. Croix and Pierce counties. Many types of families can qualify for a home – the elderly, veterans, those with kids, singles, the physically or mentally challenged, couples.

Homeowners must have a means of income to pay the mortgage, which is offered at zero interest through Habitat. The average payment depends on a few factors but generally comes in around $650 a month, including taxes and insurance.

Each family provides between 300 and 500 hours of “sweat equity” – work on theirs or another homeowner’s house. Their work and their mortgage payments help “pay it forward” and fund future homes.

Nakeia said she learned about the possibility of a Habitat home by attending an open meeting at the River Falls Public Library. She found River Falls to be warm, welcoming and with a good energy; she also liked the idea of eco-friendly construction.

She and her family had been living in a crowded townhome in New Richmond that she said “didn’t fit” them.

Nakeia completed the application last October then waited, “I didn’t think we were going to get it,” she said.

She attended an interview in November then got a late-winter call that her family had been selected to partner with Habitat at the EcoVillage.

The mother says since construction started, she’s been out helping about four times a week, often with her 16-year-old son along. So far she’s helped stabilize the foundation and affix foam blocks and bracers to the walls, saw wood, hang sheetrock and do other things.

The mother of fournever imagined herself using a power drill or table saw, but she’s learned to handle both tools plus others. She has also enjoyed the chance to meet many of her future neighbors, who’ve also been working at the site.

Nakeia says she was thrilled with the prospect of not only having an affordable home that accommodates her family, but also preserves the planet for future generations.

“This is a good opportunity to learn something different and give back to the Earth,” she said. 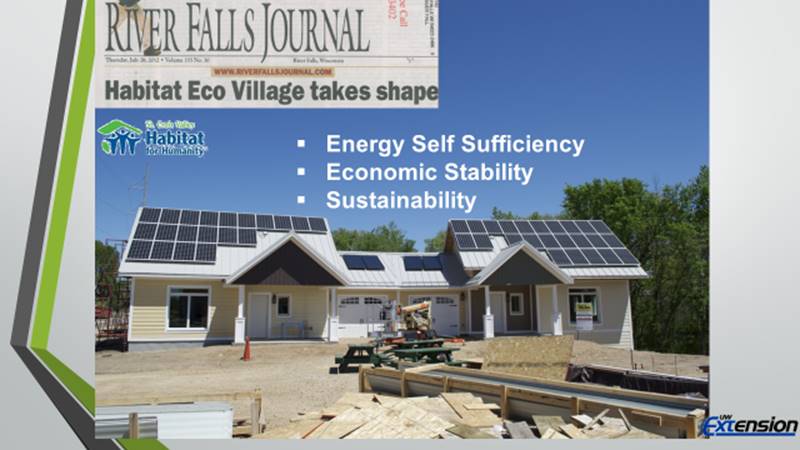