Beginning this spring semester, the University of Wisconsin Oshkosh’s sustainability office, in partnership with Sodexo, Reeve Union and the State Energy Office, launched the “Feed the Beast” campus campaign. The collaborative project hopes to serve as a model for others around Wisconsin.

“The State Energy Office is funding the project, which is to measure the potential for collecting compostable waste in food courts, which could translate to other areas like malls, airports, etc.,” said Mike Lizotte, director of sustainability at UW Oshkosh.

The idea is simple: Use collected food and other types of waste at Reeve to fuel (or feed) UW Oshkosh’s dry fermentation anaerobic biodigester, which is located on Witzel Avenue. The innovative facility produces gas, which is turned into energy as a result of decomposed, off-campus sourced agricultural plant waste, city of Oshkosh yard clippings and native campus food waste.

“It’s an interesting campaign because, as a society, we are not used to separating our food waste and other compostable materials but there is huge waste diversion potential in doing so,” said Ashley Kraus, a sustainability intern and environmental studies major at UW Oshkosh.

The idea of collecting food waste on campus allows each and every person who eats and disposes of waste at Reeve to be a source of renewable energy. UW Oshkosh’s first-of-its-kind in the nation biodigester is expected to initially produce up to 5 percent, and eventually as much as 10 percent, of the campus’ electricity and heat.

Kraus said the other items that may be put into the receptacles include napkins and cardboard boxes (or Pizza Hut boxes, as specific to Reeve). The biodigester cannot breakdown wrappers, paper boats, plastics or bowls.

Feed the Beast, paired with UW Oshkosh’s many other sustainability initiatives, are aimed at helping the University reach carbon neutrality by 2025.

“I hope that UWO students can learn that diverting waste from landfills is beneficial to the well-being of society and our future generations,” Kraus said. “Sustainability has not only to do with producing products sustainably but also with managing them properly once they are no longer fit for human use.”

Lizotte said the success of Feed the Beast will be assessed at the end of the semester to see if the program can continue at Reeve. Success is measured, he said, by the contamination level of the waste. It’s important to keep items that cannot go into the biodigester out of the mix.

“We have a few ways to help people: clearly marking our bins, using bins with tops or doors (to limit what goes in, or at least give people time to think) and by keeping the rules simple and easy to remember,” Lizotte said.

Receptacles can be found throughout Reeve Union; each are outfitted with a green beast-like character. Kraus said she hopes faculty, staff, students and visitors at Reeve will take the time to participate.

“The best way for students to help the campaign would be for them to separate their waste correctly,” she said. “It is important for people to take this extra step and effort in separating their trash because they can be a local source of renewable energy for the biodigester.”

This article originally appeared in UW Oshkosh Today February of 2012 and was written by Mandy Potts.
Check out Reeve Union’s video about the campaign… 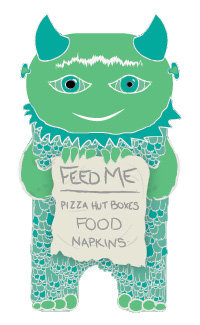