We Energies has withdrawn the portion of its rate filing with the PSC to increase fees on residents who have installed solar on their own properties (see Energy On WI News May, 2019). Met with strong opposition from many stakeholder groups, We Energies entered into an agreement with RENEW Wisconsin to withdraw the fixed-cost recovery charge, which would have totaled an average of $190 a year, in return for support for their upcoming utility-scale solar project.  There are nearly 100 customer-owned renewable energy projects in their  service territory, currently.

The parties agreed to collaborate in discussions over the next two years about issues of distributed consumer-sited renewable energy generation and We Energies’ transition to clean energy. The agreement came two weeks before the utility filed with the PSC for approval for a $130 million investment in 100 MWs of a utility-scale solar farm in western Wisconsin. We Energies has been moving to build more solar both through utility-scale projects and their Solar Now pilot (“rent-a roof”), as it works toward meeting its pledge to reduce its carbon emissions 80 percent by 2050. communityjournal, jsonline 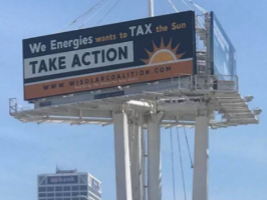